A lot of runners come through our doors for treatment, hardly surprising when studies show between 50-80% of runners get injured every year.

We often get asked about foot strike pattern. Should someone change their foot-strike to reduce the risk of injury? Will it make a difference to their speed and efficiency? Help make running easier and more enjoyable?

In ancient times our ancestors ran on their forefeet, barefoot, but over the years with changes in our activity, footwear and how we spend our time, this has been modified. Most people have now developed a pattern of heel (or rear) foot striking when running. Often running surface, posture and speed influences this too.

The research on the topic of foot strike pattern is complicated, and often contradictory. It does however, highlight several worthwhile points if you’re considering changing your foot strike.

Some studies have shown that heel striking results in a higher incidence of injury. Others suggest it is inefficient due to higher braking forces and potentially hazardous because the heel bone is not designed to take the level of force associated with running. Consequently, heel striking has gained a bad rap, particularly due to its tendency to cause knee injuries.

There’s some evidence to support a mid/forefoot strike, which results in a shorter stride/higher cadence (steps per minute), putting less load on joints. Because of this, and the move towards running more ‘naturally’, as we once did, there’s been a trend to convert heel strikers to mid-foot strikers – no easy feat (see what we did there?).

Some running coaches believe changing someone’s foot strike pattern can shift a problem from one place to another – causing more problems than it solves. A recent study supported this idea, as did another 2011 study from Brussels.

As well, other studies have shown heel strikers run more economically and use less energy than mid-foot strikers.

So who to believe and what advice to follow? Confusing isn’t it?

We believe running style, along with foot strike pattern, is an individual thing and needs be assessed for each person independently. There’s no ‘one size fits all’ recommendation.

The main priority when looking at foot strike is to prevent over striding. Make sure the foot lands underneath the hips rather than in front of them. If the foot lands too far forward of the knee, there’s an increased risk of injury to the area. Usually when people do over stride they strike the ground heel first, which is why heel striking has traditionally been seen as problematic.

Posture and cadence need some attention too, and when corrected also help to reduce over striding.

At the end of the day, as said by Christopher McDougall, author of ‘Born to Run’, running is a skill and you need to learn the skill.

Other ways to decrease injury risk

There are a lot of other factors that help decrease the risk of running injuries. 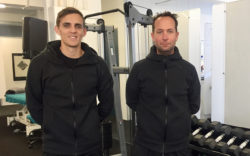 Paul Govier and Marthinus Brink are our resident physios who are also keen runners. If you have any running questions or ailments, book in a time to talk with them on (09) 309 5639.

The team at TCCP can help you with all your running needs, from physical health promotion and maintenance to injury prevention, assessment and treatment – we’ve got your back (as well as your feet and legs….)!